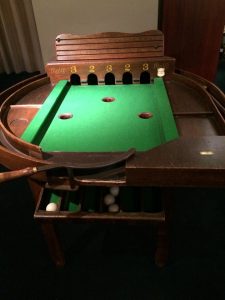 Records are unclear as to when it was first invented, but the earliest references to a game called Schwinge-Schwenglere can be found in the late 7th century writings of the Northumbrian monk chronicler, The Venerable Bede.

The first written records of the game under the name Thwangtwangler are found in Geoffrey Chaucer’s The Canterbury Tales, the magnum opus of the 14th century Middle-English author, most often used to torture A-level English Literature students with its near totally fucking impenetrable language and idiom.

It is here, in The Miller’s Tale, that we find the first ever reference to the rules of the game. These were adopted in 1538, in the original Middle-English, by TWAT (The Worldwide Association of Thwangtwangler), and the rules remain the same to this day.

Their totally indecipherable nature has also been a significant factor in leading to the game becoming the perfect pub pastime, as being completely wankered is the only way in which any of them can be interpreted remotely sensibly.

They can be found in full below: